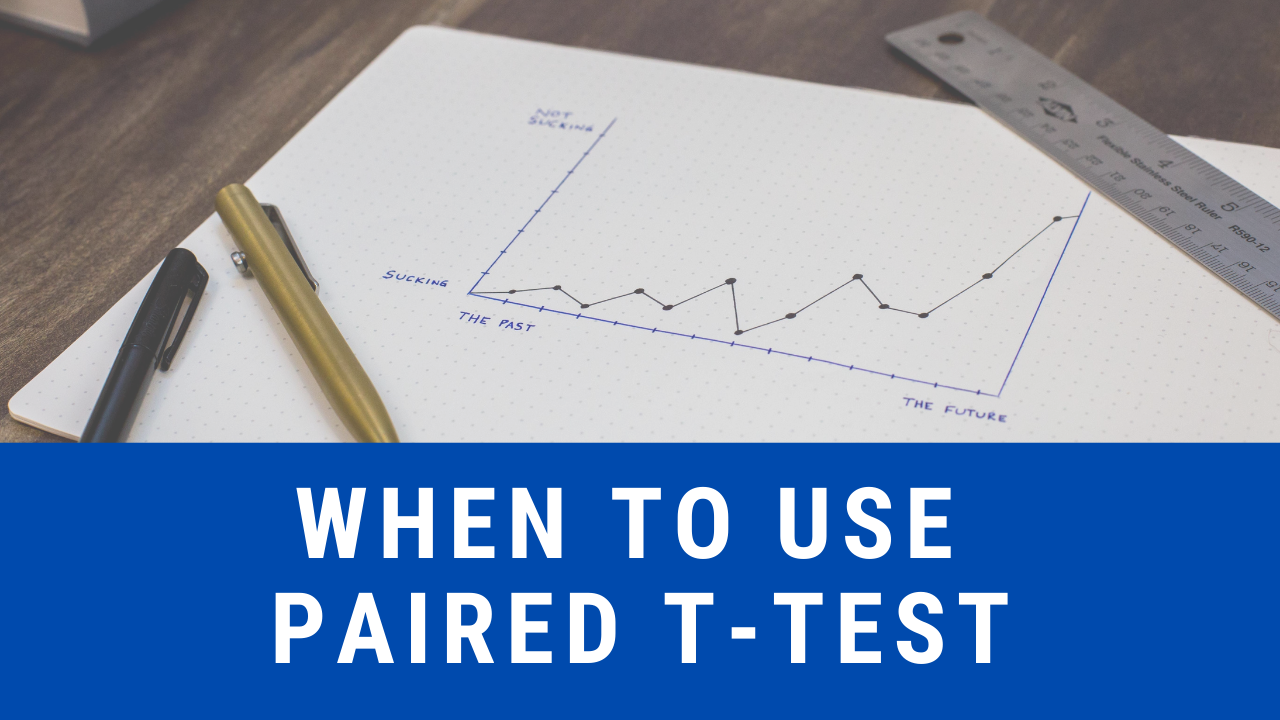 A t–Test in statistics is a hypothesis testing method that facilitates the comparison of the results (more specifically, the means) of two scenarios.

These tests are termed “t-Tests” because they boil the sample data down to one number called the t-value.

Paired t-Tests are a variation of regular t-Tests, and these tests only work on dependent samples. Dependent samples are results of tests on the same subject – could be a person or a thing – but in different circumstances.

In contrast, if independent samples are involved, you would use the Independent Samples t-Test.

While Paired t-Tests can have very useful applications, the tests can only be utilized when specific conditions are met.

We answer those questions and more in this post.

You can also check our online t-test calculator

When to Use Paired t-Test?

Before you can understand when it is appropriate to use the Paired t-Tests, you must understand what exactly the test is and how it works.

What is Paired t-Test?

A Paired t-Test is a parametric test, which means it is used to estimate unknown parameters. The test is run on dependent samples, which are paired measurements for the same set of items.

Some examples for dependent samples include:

As you can tell, a pair of measurements is involved independent samples, which is why they’re sometimes referred to as paired samples. The nature of dependent samples also provides us with insight into the naming of the Paired t-Test.

The goal of using Paired t-Tests is to find statistical evidence that the mean difference between the two tests in the dependent samples is zero.

Before you can perform the test on a dependent sample, you must ensure that it meets the requirements mentioned below.

When Can You Use Paired t-Test?

A Paired T-Test is most commonly to:

It is vital for you to note that Paired t-Tests can only be used to compare the means of strictly two paired units on a continuous outcome.

It is also critical that the continuous outcome be normally distributed.

How to Determine When to Use It

Besides the two measurements being of the same subject (be it an item or a person), the data that you want to run the test on must meet all of the following requirements:

You could also do the Paired t-Test if the two items being measured have a unique condition.

If you intend to program a Paired t-Test, you must remember to use a variable that represents the difference between the paired values when testing assumptions. Using the original variables to test hypotheses is not recommended since the variables may get altered.

In a scenario where the assumptions are not met, instead of running a Paired t-Test, you could try running the non-parametric Wilcoxon Signed-Ranks Test.

Also, if the sample sizes are too small, you should try applying a non-parametric test that doesn’t assume any normality.

Scenarios Where You Shouldn’t Use the Paired t-Test

There are some scenarios where using a Paired t-Test is not appropriate. These scenarios include:

How To Use Paired T-Test

To understand how the Paired t-Test works, you must first understand the hypotheses involved.

The hypotheses involved can be expressed in two ways – but the two express the same intention and are equivalent mathematically.

One way of representing the null hypothesis and the alternative hypothesis is:

(Which means “the paired means are equal”)

(Which means “the paired means are not equal”)

The hypotheses can also be represented as:

(Which means “the difference between the means is zero”)

(Which means “the difference between the means is not zero”)

Now, to test the null hypothesis and find out if the mean difference is zero, you must:

Paired t-Tests are most commonly used for case-control studies. They are also used for repeated-measures designs.

You could, for example, use a Paired Sample t-Test to evaluate the effectiveness of a company’s training program. To do this, you would first measure the performance of employees before and after completing training, then analyze the means difference with a Paired t-Test.

But the application of the test can be explained with a much simpler example. Let’s say a teacher is trying to find whether tests from the year before and the current year are equally difficult by measuring the difference between scores.

The data is as follows:

Step #5: Use the formula below to find the t-score

In the formula above,

D represents the sum of the differences (from step #2)

D2 represents the sum of the squared differences (from step #4)

Substituting all the values:

Step #7: Determine the p-value from the t-table using the determined degrees of freedom. Since there is no alpha-level specified, we will use 0.05 (or 5%).

Furthermore, the p-value is less than the alpha level (p<0.05). Hence, we can reject the null hypothesis in the test.

Doing Paired t-Tests may seem difficult at first, but once you get familiar with the order of the steps, applying the test will become more intuitive to you.

Follow along with the steps above a few times, and you should start feeling comfortable with it soon.